Today was the big day. We made the transition from learning processes and techniques required to build an airplane, to actually building one.

In the process I think all the team members are in agreement that even though we have completed the learning projects, their is still a lot more to learn.

The group of twelve is now divided into four teams of three members each. Each team is working on one of the four major assemblies that we are starting out with. The Tail Cone, Stabilator, Vertical Stabilizer, and the Rudder. 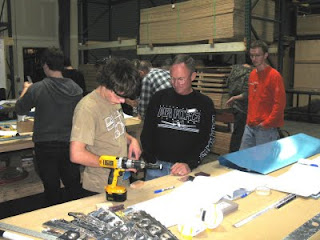 A large portion of the deburring needed on parts was completed and some assembly was begun. With twelve pairs of hands working on these assemblies, we expect progress to go quickly and we will be moving on to the Wings and Fuselage very soon.
Posted by TeenFlight Crew