Overall, the main focus of this week's TeenFlight 4 build was the wings and flaperons.  As for the wings, the wing tip on the right side was worked on, which involved proper alignment of the skins and holes.  Also, the area in the outboard leading edge of the right wing skin was cut out to serve as the inset of the landing light.

The left and right flaperons were fully completed and riveted together.  They were then attached to the wings on the mounting brackets after the wing tips were completed.  Next in the process, was attaching the wings to the fuselage.  This is a very meticulous process due to the simultaneous aligning of two spars in order to fit two pins that secure them in place.
After a while, the wings were then lined up and it's starting to look like a plane! 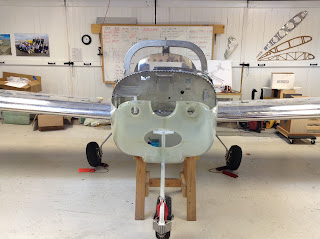 The engine was also worked on with the reconfiguring of the cooling hoses and the applying of RTV (Room Temperature Vulcanization) to seal the fuel return line.
Stay tuned!
Posted by TeenFlight Crew No comments:

This Saturday, noticeable work was done to the wings, flaperons, and engine parts.  As for the wings, the top skins were riveted on the right wing and the wing tip skins are the only remaining skins to work on.  After time was spent on aligning the holes and fitting the rivets, hundreds were set in place. The hole for the landing light still needs to be cut in the leading edge of the wing, but this can wait while work on the flaperons remains consistent. 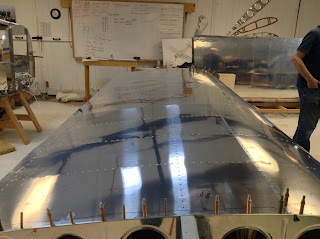 The flaperon skins were riveted on after proper alignment and fit were achieved.  The flaperons will be complete in the coming weeks, and the flaperon linkage system will be aligned with the fuselage connector. 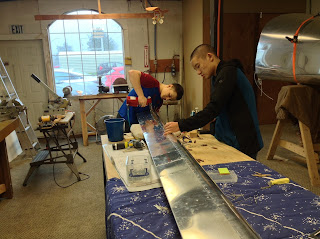 Many small engine parts were worked on for the first time after the oil was drained.  The canopy and fiberglass were also worked on, but only so much can be done since the parts are in their last stages of sanding and filling.

Stay tuned for next week!
Posted by TeenFlight Crew No comments:

It was a busy day at the hangar today.  As for the canopy, the usual work was continued with sanding and filling for the appropriate contour and sleek look. 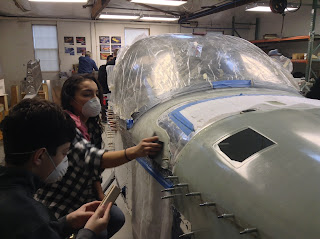 The cowling continued to be fitted to its hinges and is coming close to completion of the proper alignment.  Since the left wing is almost completely finished, the right wing was brought out and work began on the process of skinning.  After preparation work, the skins were clecoed in place and rivets started to be pulled.  After a few sessions, this should be close to completion. 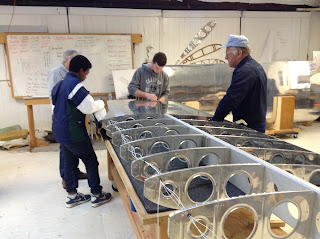 See you next week!
Posted by TeenFlight Crew No comments:

Work progressed on the canopy fiberglass with the continuous task of filling uneven areas to sanding them smooth.  The canopy fiberglass molding was also trimmed to its final size and another layer of filler was added to low spots.  Overall, it is looking great. 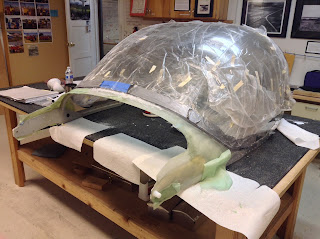 The left wing tip light, wiring and the stall warning are very close to becoming finished.  The canopy fitting to its hinges was also continued in order to meet the desired fit with the engine and to enhance aesthetics. 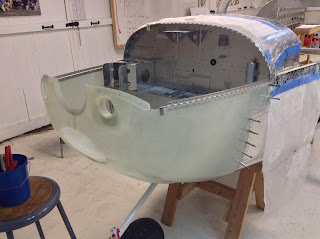 Happy New Year from TeenFlight 4!
It was good to be back at the hangar today.  TF4 continues to make great progress.  The engine cowling, canopy, wing tip, and engine have all been further worked on.  As for the engine cowling, it has continued to be fitted to the firewall and the hinges.  This has involved hours of tedious sanding and drilling, all in order to achieve a perfect fit.  The repeated process of sanding has also been crucial for the appropriate contours of the canopy fiberglass.  This will also be continued until the perfect shape is formed around the forward upper fuselage. 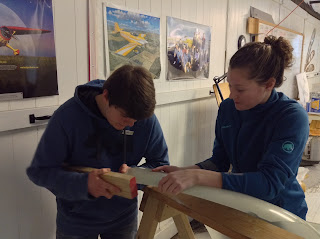 The left wing tip was further riveted and that went very smoothly.  The strobe light was also prepared and will be attached in the next coming weeks.  As for the engine parts, the cooler box and its door were deburred and riveted together.