This weeks work session was our last for 2009.

We have now completed eight 5.5 hour Saturday work sessions which we did actual construction on the RV-12 kit. 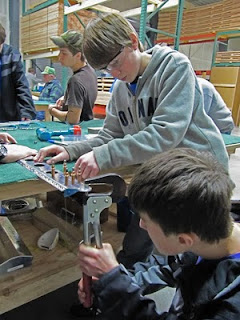 At this weeks session we began construction of both flaperons, made more progress on both wings, and completed the inventory of our fuselage kit (a major project...there are about as many parts in the fuselage kit as there is in the wing and emp./tail cone kits combined).

The emp. tail cone kit work was finalized with the completion of the pitch trim mechanism, and bolting the last control horn onto the stabilator. After completing the kit inventory, some initial work was started on the fuselage construction. 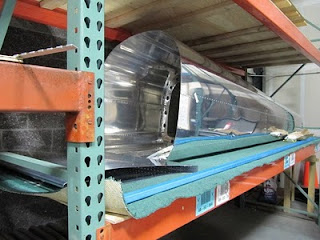 Both teams building the wings finished (finally...they were getting a little tired of deburring and fluting) with all of the part preparation and they will be starting next time with the steps that install ribs on the wing spars.

We discovered the danger of working with a construction manual that was written in the context of one person doing the work by themself.  Some of the wing nose ribs need to have some trimming completed on them...with two teams (three members each team) working separately on the two wings, we ended up with five too many ribs getting modified for one of the wings...fortunately we knew where to find more.

We are taking a two week break for the Christmas and New Years holidays but we will be back to work on Saturday Jan 9, 2010
Posted by TeenFlight Crew