Today was one of the first weeks of true spring weather for us.  We threw open some of the windows and let the sunshine and warm breeze in!  There was talk of opening the hanger door for the next future sessions, though that could be a bit of a challenge considering that most of the door has been sitting in the same position for close to fifty or more years.  It has rusted to its track over time.

The landing gear came back from being painted and that assembley has been taken care of. It has not yet been installed however because of the effort still being concentrated on the wiring inside the fuselage.  After the wiring is done, it will permit the fuselage to be turned-right-side-up and the landing gear, tail feathers, control cables, seat backs, seat belts, and avionics can be installed.


These are the two main gear completely assembled with the tires, brakes, and legs.﻿ 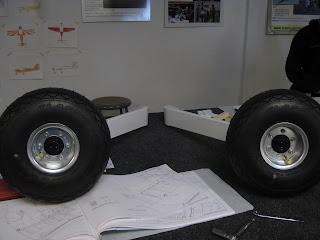 The nose gear is not a steerable mechanism, so the ground manuvering is done solely by rudder at higher speeds and by differential braking at low speeds. (e.g. to turn left, the left brake is actuated.  This stops the left wheel and turns it into a pivot point that the entire aircraft rotates around.)  The nosewheel castors within a sixty to ninety degree range. 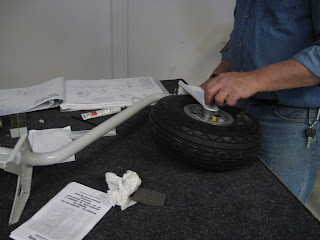 The visible parts of the wing attachment pins were painted, and they were nearly completely assembled. 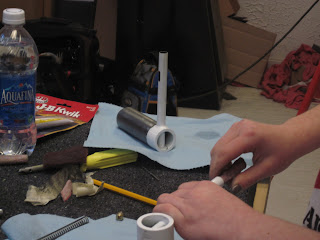 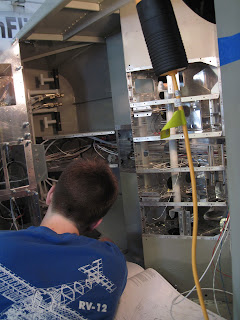 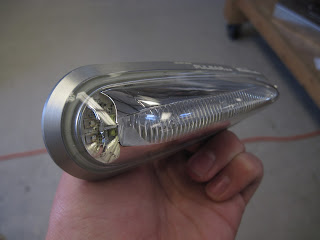 Final drilling of the wingtip for the light attachment fairing. 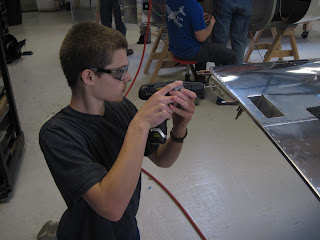 To be continued.
Posted by TeenFlight Crew