Another TeenFlight student with a pilots license. 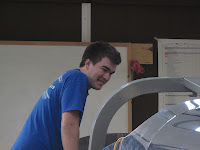 Aric Krause, age 19, passed his check ride and his tests earlier this week and became a licensed Sport Pilot.  Aric was a TeenFlight 1 student and was a committed member to the first airplane build (2009-2011).  Last fall he returned to help as a senior student mentor on the TeenFlight 2 build and has been generously helping ever since.  Two years ago he was awarded a flight scholarship from one of the local EAA chapters. Through the TeenFlight program he also received instruction hours on the RV-12 he helped to build.  After accumulating over 50 hours he finally finished up his training in time to fly the TeenFlight 1 airplane to OshKosh.
Posted by TeenFlight Crew