This week at the hangar, the TF4 students mainly focused on the the empennage, the landing gear fairings, and the battery installation.  Noticeable progress was made on the vertical and horizontal stabilizer which are all apart of the area known as the empennage.  The main ribs that make up the vertical stabilizer were all riveted to the rear spar of the assembly.

After this task, the skin for the vertical stabilizer was unwrapped and the painstaking job of deburring began.  As for the stabilator, the inspar ribs were aligned with the spar caps and will soon be riveted in the coming weeks. 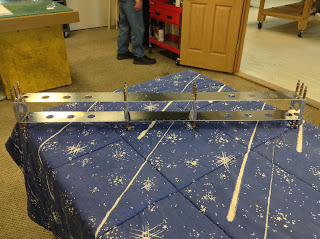 The landing gear fairings were predominately being sanded in order to smooth out the space between the front and aft halves of the main fairings, but other work was also completed.  The wheel fairing brackets were aligned and clecoed in order to maintain the fit between the two halves. 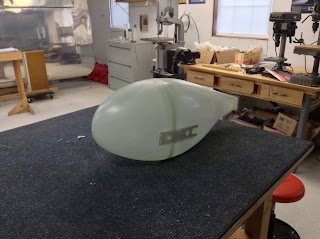 Also, the battery was installed with the help from the mounting bracket.

As for other news, it is time to pass on the writing of the blog to another TeenFlight student member.  So this is Davis signing off.  It's been fun.  Thanks for reading and stay tuned!
Posted by TeenFlight Crew