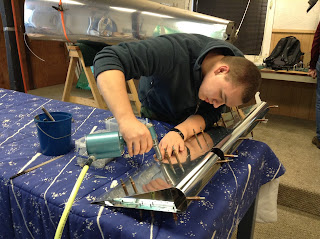 Many fuselage details were worked on including the installation of previous parts and the organization of the cables.  Also, the main landing gear struts were re-installed to verify the fit as well as to torque the main bolts.  The nose landing gear was also installed after time was spent aligning and drilling the assembly to the engine mounts.  The rear section of the engine mounts must also be completed with this step due to the fact that the nose gear bolts screw into them.