The past two weeks have been exciting for TF4 with the painting of the internal fuselage and many other tasks.  Earlier this week, the fuselage was transported to the Van's Aircraft factory to be painted, and it looks great!  Of course, this could not have been done correctly if it weren't for the hours of prep work that were completed prior to the paint. 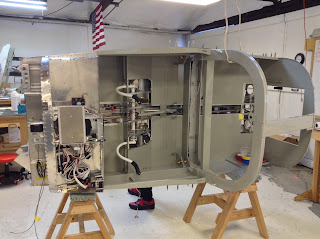 As for the vertical stabilizer, the upper and lower spar caps were prepped and aligned with the vertical stabilizer rear spar and will be riveted next week.  The rudder was worked on with the attachment of the spar caps and the rudder horn to the rudder spar.  Also, the rudder ribs were riveted to the spar.  The baggage bulkhead was trimmed to allow for an easier way to remove it, without having to remove the fuel tank with it.

Despite all of the sanding that has been done on the engine cowling, many pinholes still remain on the surface.  The solution comes down to putty which has been applied in multiple layers to fill the holes.

The right wing tip is very close to being finished after the riveting that was previously worked on. The landing light is the last task waiting to be completed on this wing. 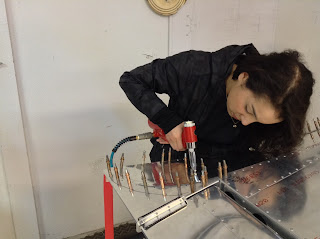 Stay tuned for next week for more progress!
Posted by TeenFlight Crew