The projects from last week continued and are looking good.  The fuel tank was a little messy this week with the application of Pro Seal in order to make it fuel/air tight.  This process consists of applying the solution to each edge and rivet before final assembly.  So far, the fuel gauge, fuel neck flange, and the main skin have been sealed and riveted.  Once the sealing is completed, the tank will be checked for proper functionality.  The wing team also underwent the tedious process of deburring.  Each wing consists of many intricate pieces that form the structure of the wing, called ribs.  Many of these ribs have been completed; however, many more remain.  The engine cowling was also continued and has been trimmed to size.  Match drilling was worked on to ensure the proper fit to the hinges that hold it on.  After being delayed for the fitting of the canopy, the wiring resumed.  This consisted of a few hours in the airplane routing wires and installing brackets. 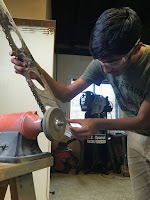 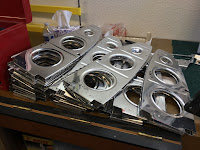 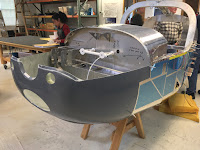 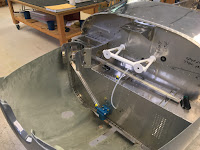 Stay tuned for next week!
Posted by TeenFlight Crew