Today was the first day back for TeenFlight 4 after the summer break.  It felt nice to be back at the hangar and we made a lot of progress on the airplane.
We mainly worked on the assembly of the wings, the canopy frame, wiring, and the fuel tank.  After planning the wing building, we dove into the project and started by clecoing and trimming the forward and aft ribs.  We then clecoed them and they were all a good fit.

As for the canopy frame, the gas struts were drilled, the frame was filed down to allow clearance for the later-installed canopy, and the forward and aft attach angles were drilled and lined up on the frame. 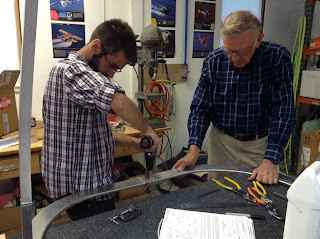 The fuel tank was also worked on and mainly involved an inspection to remember what had been done on it during the previous class.  Many wires and harnesses were routed through the fuselage from the forward end to the aft end in order for the avionics to function correctly.

Overall, this was a great first day back at the hangar!