Over the past two weeks, many tasks have been worked on including the fuel tank, engine cowling, canopy frame, the wing skins and wiring.  As for the fuel tank, it has been continued to be sealed and tested for leaks.  The engine cowling has still been undergoing the tedious work of trimming and sanding for the proper fit.  The work has been paying off with a great fit between the upper and lower halves. 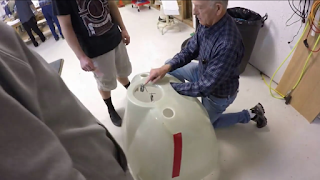 ﻿
As for the canopy frame, the holes in the plexiglass have been drilled and the canopy latch has been undergoing many intricate details.  The canopy is also starting to be mounted to the fuselage.  The wings are in the stage of being skinned which has been an exciting phase so far.  The internal wiring was continued, as well as the flight control systems.