This week's midweek session was tonight with five students that showed up to get in some extra-curricular building time.
I was so focusesd on building that I did not take many pictures, but there was still progress:

One of the students worked with a mentor more on the left wing's light fixtures.

Two of the students continued with one of the flaperons.

The other two students completed the final assembly on the rudder pedals and then attached them to the fuselage.

(sorry about the sideways picture)
<----DOWN 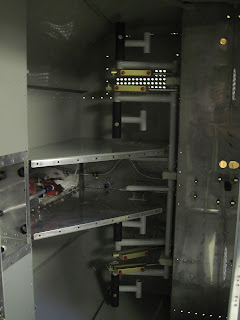 UP---->
Posted by TeenFlight Crew