A lot of progress was made at the TF4 hangar today!
The control stick pushrods were drilled and tapped, and the flap handle blocks were also cut.  The flap handle and the control rod were assembled along with the main push rods.

The fuel tank was temporarily assembled to judge the fit in the plane.  Also, the rear spars in the wings were deburred and the flaperon spar was prepared. 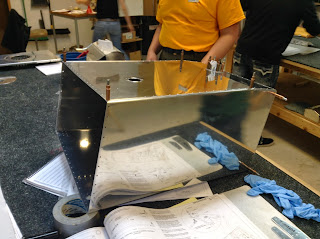 As for TF3, prep work for the airplane's paint scheme was worked on today.  All of the masking was completed and the areas where paint will be applied were scuffed.
TF3 is getting very close to being fully complete!